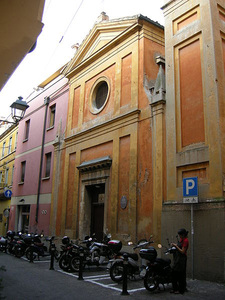 This is the Church of S Maria Labrum Coeli  also called
La Baroncella  - in Via Fusari
where he was baptised on 25/26th December 1736 .
To be quite accurate, this actual church was built later in 1780
It is now an Etruscan Orthodox Church 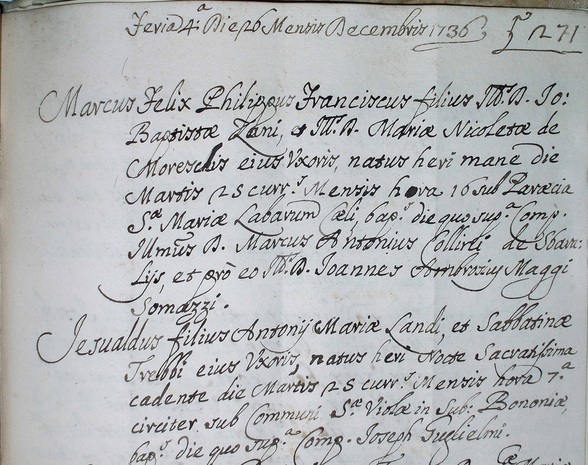 He became a Notary on 18th June 1755.
He practiced the profession with his father. His father died before he became notary

He established taxes and managed public works, paving the city roads and other things.

In these edicts or printed warnings, as Chancellor D’Ornato, he used the surname Zani – Bettini but in the registers he signed only Zani.

He rolled out acts for Santa Maria delle Grazie.He was the notary corrector for the first trimester in 1787 and died in about the end of that year.

He lived first in the Parish of Santa Maria della Baroncella,
then  in 1776 S. Martino Maggiore,
after 1784 in S Salvatore

He owned a house in the alley called Gorzadello (in the Parish of San Marino) and a big stable called Dei Felicini, that he sold in 1780 to Giovanni Battista Casolari with an agreement to free it in 1787.

On January 13, 1771, it is recorded that he repaired the chiavicotto (a small hidden masonry conduit in the body of the street or in another embankment, and used to cross the water from one side to the other) of San Manolo that damaged the wine cellars of the notary’s palace.

Marco Felice Zani was an important man.
He was a well known lawyer and notary.
He was responsible for paving Bologna.
According to the letter written by his son Giovanni to Achille - Marco Felice was Chancellor and absolute Master of Bologna for 10 years and then Envoy of Pope Pius VI, and Minister of several Departments (He became Chancellor under Legate Archetti to Pope Pius VI) 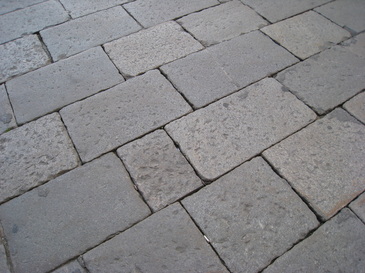 Paving in the main square of Bologna
Recent research in Bologna found his  - Record as a Notary.
He was a notary  from 1755 - 1787
The record confirmed most of what we already know about him.
His notarial seal was the Zani family crest as seen at the top of the page.

Zani Battini: -Marco Felice
Zani-Bettini Marco Felice son of Gio Battista notary of Bologna from 1755 to 1787 adopts the seal of Gio Batt Zani-Bettini senior which is deposited in our archive  where it is to be found at [St] 55 as already described.

Gio Batt, son of Filippo notary, born of Angela Rivani 8 April 1697, baptized the following 9th (while living in Strada San Donato), married Maria Nicoletta Moreschi 11 November 1731, from which was born on 25 December 1736 the son Marco Felice who studied with the Jesuits (S.Lucia), with Lodovico Montefani and with [parecchi =quite a lot of] others. He was in practice with his father. He has now died some years ago.

He went into the Great Chancellory and in that of Ornato [decorations possibly] shortly after his nomination, it was he who undertook the raising of taxes , to pave the town and other things. Further in these edicts and notices under seal as Chancellor of [decorations] he took the name Zani-Bettini while in deeds he signed himself simply Zani.

He was lawyer for S Maria della Grazie

He was proof reader of the notaries for the 1 [Trini?]. 1787 he died towards the end of the year leaving a widow Candida Torelli and the son Gio Battista who became notary 1802.

He owned in the lane called =Gozzadello= under the of S .Martino, the great stable [Palazzo??] called dei Felicini which in 1780 was passed to Gio Batt. Casolari with the agreement to [francarlo comefice = vacate?] in 1787.  Further on 13 January 1771 is recorded the decorative repairs and works under S.Mamolo which had damaged the kitchen of the Notaries Palace.

Commission was to the son Gio.Batt and Enrico Magnoni. Further to that Magnoni and Gio. Batt. made a petition to have them, to the Court of Appeal, as with those of his grandfather.  Magnoni on 6 April 1804 said he hoped to be heard in possession of [all things said] because since 03 Gio.Batt. parted from Bologna. 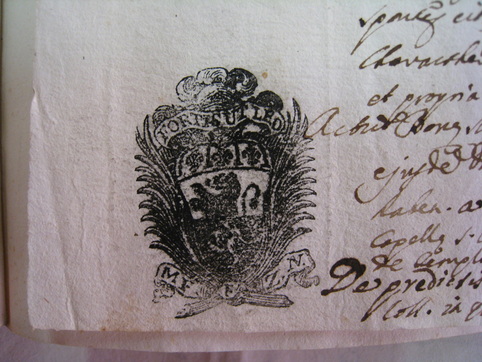 In the Archivio of Bologna are 2 boxes of papers that are to do with Marco Felice Zani. They are mainly legal documents that have required his signature as a Notary or his stamp (seal).
Every Notary had their own Seal which they could design themselves. Usually they would use a family crest which they personalised in some way.

Marco Felice took the Seal that his father used, but put his own in initials on it - MFZN
The Motto "Fortis ut Leo" means "Strong as a Lion"
It is that of Zani of Bologna - see top of page 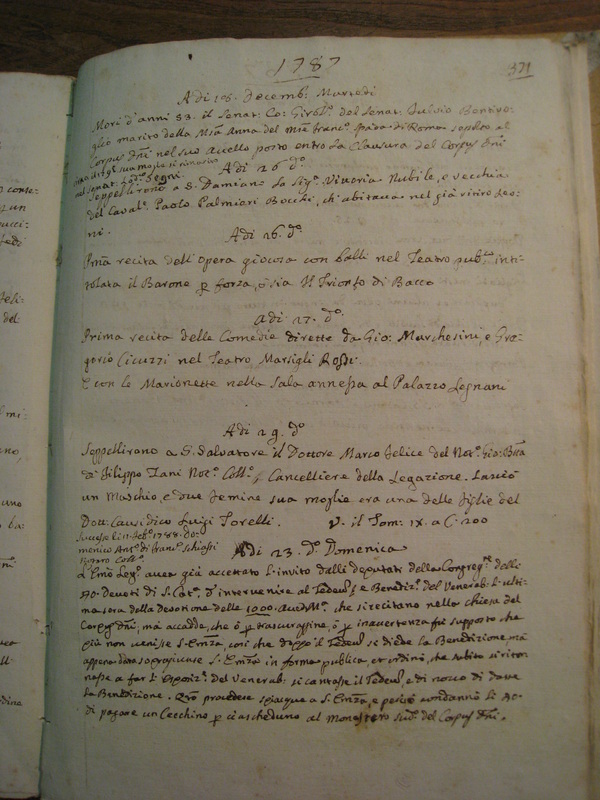 Report of his death and funeral 29 December 1787 at S Salvatore Bologna
He died before Napoleon took control of Bologna - when the normal practice was for burial in the church or near to it. There are no graves to be found now at S Salvatore.
Over time problems occured with space and hygeine and Napoleon ordered the practice to stop and built a large out of town cemetery to be built - the huge and famous Cimitero della Certosa of Bologna

Marco Felice's wife - Candida Torelli - outlived him. She died/was buried 8th Aug 1816 in The Cimitero della Certosa in Tomb 91
Her memorial plaque would have been in the place I have marked below with a cross. Her bones are in the ground in front of that. 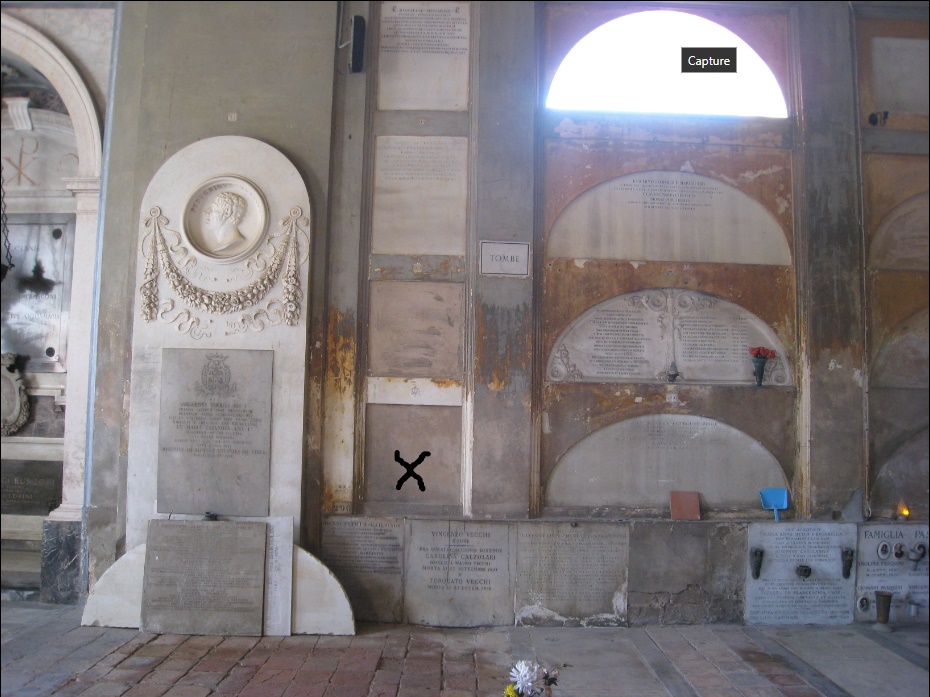