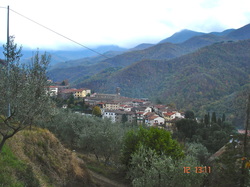 In the 11th and 12th centuries members of the Zani family made gifts to the Abbey at San Godenza  near Florence.
These are documents in three deeds dated
1067
1079
1125
The deeds can best be  viewed online at The Archivio di Stato of Florence.
http://www.archiviodistato.firenze.it


Gamurrini, the well respected 17th century historian from Florence uses these documents as source material for what he writes about the Zani family

"Of this one  - his son is another Gianni, who was inclined to magnificence and to piety towards holy worship; and intended to enrich the Abbey mentioned above.  To this end, he purchased land, houses and churches increasing  its wealth and its lands; not wishing that it should be divided, as in proof of the truth we find deeds of the writings of the Archivio of SS Nonziata di Fiorenza. There is annexed through authority of the Pontificate the said Abbey and we see all the writings of the Abbey enabled by the advantage of this house;
but by a simple advance we know that Gianni -
son of the B.M. di Fusco,
bought the church of St.Lawrence in Fornace with its Court, Poio and castle etc. to give it all to the Abbey in 1067.
As the deed of Guido confirms, the instrument is in that Archivio of S. Nonziata
Gianni begot Ghierardo,
who with a declarator, which said,  I  make a gift , for the cure of  my soul
and that of my son Ioannis
of the last of his state a donation to the said Abbey of S Gaudenza of all that he possesses in Plano Novo, the which donation we see,
that Gianni his son
immediately agrees to; and that donation is made into a deed by Ildebrand in 1125.
It is confimed  in the above mentioned Archivio. All attest the greatness, which longs for  ............ Not for arguments  of grandiosity, and piety of a family in such remote times.
This last Gianni begot Ghiraldo, who was father of another Gianni, as we see in a deed of S Felice in the  Archivio of the Canons of the  Metroplitana of Florence of 1213.
And this Gianni
came to be described among the Magistrates as of the first rank of Florentine nobility:
as in the deed of Rainero of 1213 which is conserved among the inheritance of Sig Guglielmo of Guglielmo Akoniti, and he was father  to another Ghiraldo, who was Consul in Florence, as is dicovered from several deeds, and in particular from that of Buono Prati:  nor of less esteem were his sons, one of which Caraduccio called Duccio was made Consul"
1067 Novembre .., Firenze , S.ma Annunziata (serviti) 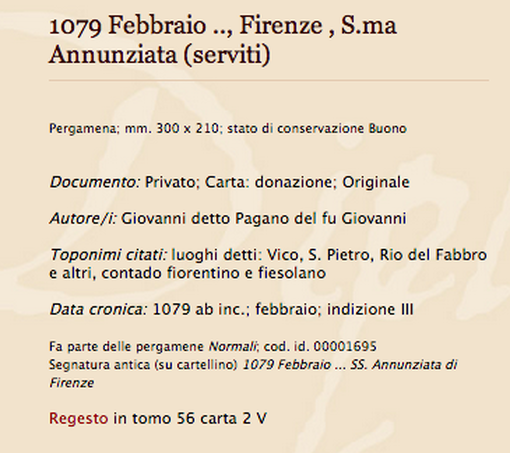 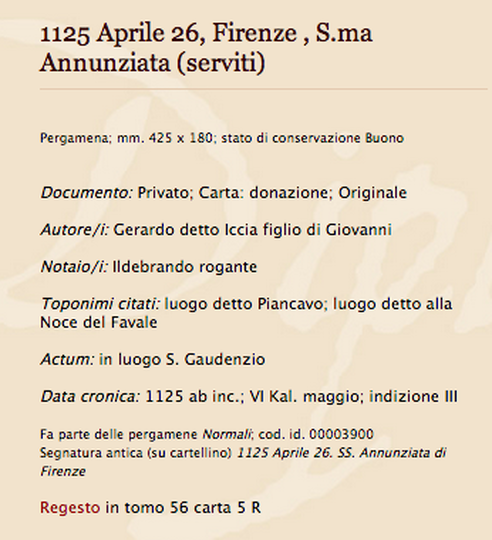