Giovanni Battista senior was born 7/8 April 1697  "while they were living at Strada San Donato"
His parents were Filippo Zani and Angela Rivani
He was baptised on 8/9th April 1697 "in the parish of San Donato"
"Giovanni Battista of Filippo, notary, was born from Angela Rivani on April 8, 1697 and was baptized the following 9th (while living in Strada San Donato). " - extract Notary Records Ridolfi card 224 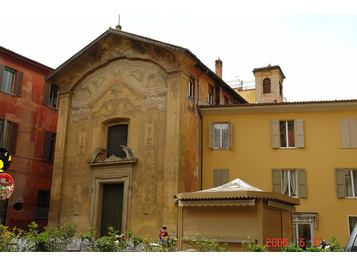 Birth record
Above is his birth record  (Bologna Church Archive 2013)

The above is their wedding certificate (Carrati records Archiginnasio Bologna)

Zani Gio.Battista son of Filippo Notary of Bolgna from 1719 to 1746 had for seal a shield in the form of an upside down pyre  framed by two crossed branches and knotted with a label in which are the initials I.B.Z.N. It is surmounted by a feathered helmet  and crossed by a  label with the motto “Fortif ut leo” Inside  the shield are 3 lilies above and a lion rampant in profile looking left, with it's front part in black. The background of the lion is in  silver . The rest of the shield is silver with a black background.

This seal is passed in succession to Marco Felice Zani (Bettini) and was deposited in the archives where it is found at number 55.

Filippo Zani married Angela Rivani (he was born from Sebastiano and from Clemenze Silvagni
on 30 Oct 1649 in the parish of Biagio)  He married Rivani on 24 April 1690 from which came Gio Batt  on 7 April 1697, baptized the following 8th in the parish of San Donato. He studied grammar for 5 years under Raimondi Cavallino and law with Vincenzo Sacchi

Created notary 21 June 1719 and appeared immediately in the Cancelleria Maggiore del Legato and Foro Civile (literally Great Chancery of the Legate and the Civil Forum) office number 14 (under the surname Bettini).

In 1741 he stipulated the announcements  of Cardinal Alberoni  for the  Society Calzolari , of the nuns of San Pietro Matrire and of Santa Maria della Carita

He lived in S.Margarita 1722 and then  S. Maria della Barocella with his brother Dom Sebastiano.

Notice that he never signed Bettini and that in the judgements  he always signed the surname Zani.

He married Maria Nicoletta Moreschi  in 1731 from whom came Marco Felici 1736.

Was “correttore” (proof reader) from the third trimester in 1740.

His succession to be Enrico Magnoni and probably first to his son and grandson. 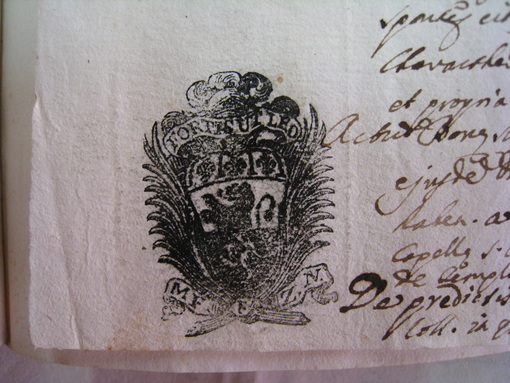 This is the Notary Crest for Giovanni Battista's son Marco Felice.
Giovanni's would have been much the same I think except instead of
MF ZN
which stands for
Marco Felice Zani
His was
IB ZN
this is old latin and stands for
Ioahnis Battista Zani
which is
Giovani Battista Zani

The motto - "Fortus ut Leo" means -"Strong as a Lion" or "Fortify yourself to be as strong as a l.ion"
The crest is that of Zani in Bologna