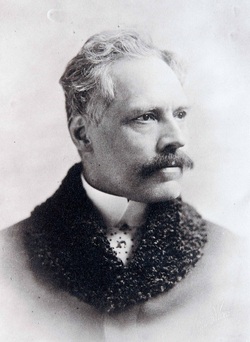 Cesar Z de Ferranti
Cesar was born in 1831 in Paris, France. He was the oldest son of Marco Aurelio and Julie Zani de Ferranti.
In 1860 he married Juliana Szczepanowska (nee Scott) at St Georges, Liverpool  - Marriage certificate
Initially he taught languages in Belgium. Then he became a portrait photographer and moved to England. He set up a studio in Liverpool with his father-in law who was a portrait painter
He died in 1903 in London and is Buried in Hampstead Cemetery section WC, Number 241,  Number of internment 11419.
He had 2 children
Juliet 1858-1936
Sebastian  1864-1930


Change of Name from Zani to Ziani -
Marco Aurelio called himself  - Zani de Ferranti
Cesar also called himself Zani until some time after the birth of his son Sebastian in 1864.
In 1872 there is a note in Juliana's diary of Mr Negri  (the genealogist) coming to tea.
In 1875 Sebastian signed his name in a letter as Ziani and in 1876 his mother also refers to him as Ziani.
Marco died in 1878 still calling himself Zani.
When Cesar died in 1903 he was called Cesar Ziani de Ferranti.
Perhaps there was some information from Mr Negri which inspired Cesar to change his  name from Zani to Ziani.  - Ziani being the name of the old Doges of Venice.