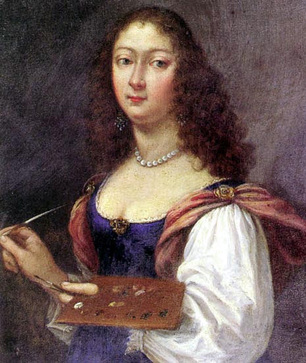 Elisabetta Sirani - A self Portrait
Giovanni Battista Zani 1638-1665 was the older son of  Sebastiano Zani and Clemenze Silvagni
Painter printmaker and poet. He  lived in Bologna.


His claim to fame was through

Her story is one the biggest Italian medieval mysteries.
She was female, and also an acknowledged brilliant artist, and she was murdered - poisoned.
Our Giovanni Battista attended her father’s art lessons and was wildly in love with her and proposed to her at least twice, but she would not leave her invalid father or her painting, for marriage. It is surmised that she was murdered (poisoned) by a jealous love rival but it may have been natural causes.
Not only did she die young but so did Giovanni Battista – at about the same time as Elisabetta. Perhaps he died of a broken heart?

Here is his bio in the Oxford Index

Giovanni Battista Zani was a pupil of Giovanni Andrea Sirani. He hoped to produce a collection of engravings of works by Bologna's greatest painters, and in order to do so he made drawings of the pictures in the monastery of S Michele in Bosco. He died young before the etchings were finished”