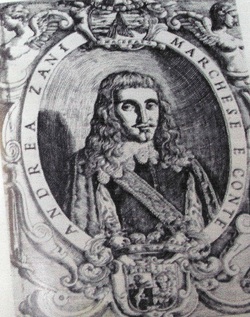 Andrea was  the son of  Count Paola Zani and Giovanna Lambertini - the daughter of Senator Giulio Cesare Lambertini
It is not known when or where he was born or baptised, but it was almost certainly in Bologna about 1605 (His parents married in 1604 and he qualified in law in 1630).

He was Doctor of Laws and Academics
He was a man of letters who declaimed his verses in Venice and at the Courts of Vienna and of the Gonzaga at Mantua  where  he was  made a Marquis by the Duchess of Mantua.
He was cup bearer to the Emperor Ferdinand the third

According to Gamurrini both sons died without descendants
According to Negri , Giovanni  had  descendants
After school he went to study Law
He learnt to sustain public debate and graduated (Laureato) in 1630
He then was accredited to the Accademia da gelati callled Macerato.

Later he travelled to venice where he impressed the intelligencia
Following this  he was attached to various Accademia  as a result of his poetry. One of these was Barbara Strozzi  where there is a commemoration of his poetry dedicated to Emperor Ferdinand
(In 1637 Giulio Strozzi (a rich Venetian)created a new academy, the Accademia degli Unisoni, partly in order to serve as a showplace for Strozzi's singing. The academy was something of a debating society or discussion group, with musical performances provided by Strozzi. She also apparently served as a mistress of ceremonies, specifying the evening's theme and judging the arguments put forth by other members. Strozzi was well known to all the members of the academy; a book describing its proceedings was dedicated to her)

After that Andrea went to the Court of Mantua where he found favour with her Highness Maria Duchess Regent. She made him a Marchese  or Marquis and arranged with her son (Charles 11 Duke of Mantua) for Andrea's marriage to Lady Lucrezia Austriaca the daughter of Prince Siro da Corregio who had retired to that court after the turbulence in his own state and was seeking asylum of the nearby House of Gonzaga

Andrea pushed the interests of his father (Count Paolo Zani) and brother in law (Lucretia's brother Maurice) many times in Vienna and His Majesty Ferdinand 111 The Emperor always distinguished him particularly, and called him his "Coppiere" cup bearer.
But while in court advancing the interests of his brother in law (Maurice) on behalf of his (Corregio) relatives, he contracted a grave disease and died there in the year 1651

Translated from Gamurrini
He lived for many years in the court of Caesar favored and honored by The Majesty and in particular by The Majesty of the Empress Gonzaga (defonta ..) and died in that court the year 1651. having had to D. Lucrezia said, the Count Paolo Marquis and Count Giovanni, who died as children 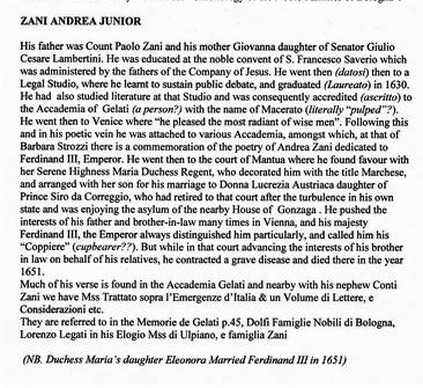 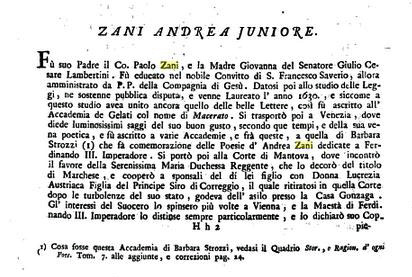