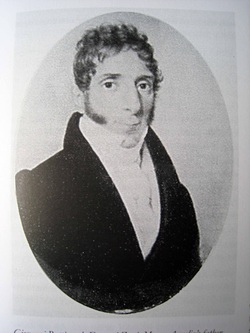 Giovanni Battista  was the son of
Marco Felice Zani and his wife Candida Torelli
He was born on 14 Oct 1778 in Bologna, Italy.
Baptised 14 Oct 1778 in the Church of San Martino Maggiore in Bologna
He married
1. Maria Franzaroli about 1799
2. Julie Josephe Daulmerie in 1825
He died 19 Sept 1857 in France

Church of San Martino Maggiore
His father was an important man. He was a Notary, trained in the law, he was Master of Bologna for 10 years and Chancellor under Legate Archetti to Pope
Pius VI, at a time when Bologna was under the rule of the Pope.
They lived in Palazzo Mazzacorati in Via Cesare Battista (previously Via Barbaziana)
Marco Felice his father died in 1787 when Giovanni was only 9 years old.  We must assume that he was then brought up by his mother Candida Torelli.
In 1796 - Napoleon invaded Bologna when Giovanni Battista was  18 years old.
This would have turned their world upside down. Bologna had previously been under the control of The Vatican.
In 1799 Napoleon was pushed out of Bologna by anti French feeling as the Austrian-Russian army reconquered northern Italy.

Marriage
In about 1799  - when he was only 21 - Giovanni Battista married  Maria Franzaroli. (this date is based on the assumption that they married the year before their first child was born)
She was the daughter of a goldsmith.

After the battles of 1799 and of 1800, the  hospitals of Bologna were crowded with the wounded and sick of almost all the nationalities of Europe

Giovanni and Maria  had a son in 1800 who died just before his first birthday. This first child, born on July 6th was called
Marco Aurelio Felice Luigi Giovanni Battista. He died the next year on June 26th 1801.
The registration of his death in S, Salvatore parish says

In 1802 Giovanni Battista  became a Notary, following in the footsteps of his father and grandfather
- see his Notary Record below and here

"Zani Bettini: - Giovani Battista (junior)
Zani-Bettini Gio.Batt son of Marco Felice Notary of Bologna from 1802 to……
Has a seal representing two complete angels, of mind [igundi] and in feet, in act of embracing. There is an arch above of gold with a black listel and with the motto “Iustitia et pax oseul sunt”. The one on the left holds a twig high with his arm. They are surrounded by a black rectangle with the initials GBZN.
Dottor Marco Felice, notary, son of Gio Batt, also notary, born of Maria Moreschi on 25 December 1736 baptised the following 26th. While living in the parish of S.Maria Labarum Coeli (la Baroncella). 8 Sept 1771 he married Candida Torelli and then lived in the parish of S Martino Maggiore with his wife who bore Gio.Batt on 14th October 1778 born in that parish. He studied Latin with Don Rocco Fertini and th law with Angelo Bersani, the [rolandnia] then with Cesare Camillo Zanetti
Created notary 28 may 1802. Already up to 18 May 1802 he had requested the Civil Section of the Tribunal of Appeal for a fresh examination and was found more than suitable. On the 20th his petition was accepted and he submitted himself afresh for exams for Saturday.
He left Bologna in 1803. Then he is seen as usher to the Justices of the Peace of the second circuit.
In the archive he has expenses of [matrici = matrices/ vouchers] and nothing more from 1802.
The sign of [labell..lo] was uplifted after the note which was presented in March 1803 by his [commissario = successor?] Enrico Magnoni on 6 April 1804.
He used to have a house in Via Barberia 1239."
The death of his wife
On 17 April 1803 his young wife Maria died. She was 22 years old and was in early pregnancy. She was stabbed 46 times by Giovanni Battista her husband.
Giovanni Battista fled the country, ending his career as a Notary.

Here are some of the records found
1803 18 August Sra Maria Franzaroli, wife of Dottre Gio.Bttsta Zani, from wounds, pregnant, her life closed yesterday 4 hours after midday, of injuries from her husband barbarously, of years 22 in her home once Palazzo Felicini, St ( name of the church) was buried therefore with family only.

Roughly translated
Dr Zani (note 8 see below) of honest family got mad by jealousy against his wife, killed her with endless stabs, then fled from Bologna to find a place of safety.

Here is a rough translation
And Dr. Giovanni Battista Zani Bettini, newly created notary, born in 1778 of Marco Felice and Candida daughter of the lawyer Luigi Torelli, of which Ridolfi (c 31 n. 249) says that "he parted from Bologna in 1803." The well-known notary father, had died in 1787 leaving this son and two daughters. (Galeati, Journal XIII, B90, 371 c). In 1780 he had taken possession of the building already on Barbaziana Felicini in 1239 (now Via Cesare Baptist 23), which the guardians of the minor child sold to Gaetano Dalla Noce, and who became Mazzacurati (Guidicini, Cose Not, 1 p. 109) Dr. Giovanni Battista Zani returned to Bologna after some time.  In 1815 he was appointed papal messenger at the Court of Appeal  (GB, October 7, 1815), and appears with the same job in the 'Almanac” of 1830 (p.72). According to the Memoirs ms. B3212 (on April 17, 1803) his wife, the daughter of a goldsmith, was 22 years old and a few days pregnant: she was killed with 46 stab wounds

According to the recent author of the book based on the diary of Tommaso de Buoi - Giovanni Battista returned to Bologna in 1815 and in 1830. We checked the sources for this information and believe them to be misleading. The person they refer to was a Giovanni Zani.  Giovanni Battista was always referred to as Giovanni Battista. The second reference in 1830 is especially unlikely. At that time he had been recently married to his new French wife. It would seem extremely unlikely that he would consider bringing her to live in Bologna where she would discover the fate that had befallen his first wife
After he left Italy
According to his son Achille,  he served in Napoleon's army and settled in France after the fall of  Napoleon's Empire -1815

In 1851 Giovanni wrote a letter to his son Achille giving a brief history of the family for Achille to show to someone.   The letter is in French but the translation is here

Giovanni was not born with the surname Zani de Ferranti. He added 'de Ferranti' during his life time. He said that it was due to an inheritance (his mother Candida Torelli sister's husband).
see above letter
He added the name Ferranti but also dropped the name Bettini used by his father and grandfather

"Has a seal representing two complete angels, of mind [igundi] and in feet, in act of embracing. There is an arch above of gold with a black listel and with the motto “Iustitia et pax oseul sunt”. The one on the left holds a twig high with his arm. They are surrounded by a black rectangle with the initials GBZN".

It is interesting that he does not have the same Seal as his father and grandfather. His father's  Seal was past to Magnoni after his death. Giovanni would have been too young then to inherit it directly from him. However I would have expected Magnoni to release the seal to him when he became a notary. 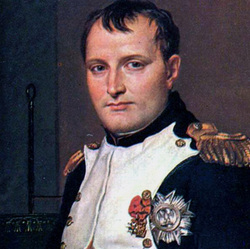 In June 1796 Napoleon invaded and took over Bologna. On the whole he was given a warm welcome by the people who were fed up with the years of Vatican rule (the pontifical yoke)

On Dec 4th 1796 the new constitution of the Republic of Bologna was voted and approved by the representatives of the city
This republic was short lived being quickly replaced by the Cispadane Republic
But in 1799 anti French feeling caused the withdrawal of French troops.
In 1800 Napoleon crossed the Alps and manged to recapture Italy almost entirely, for a brief time, inspiring  Italian freedom fighters, who formed several clandestine brotherhoods, with a vision of a new free and united state - the unification of Italy -the Risorgimento.
The Cispadane Republique soon became the Cisalpine Republique and then the Italian Republique and then in 1805 The Kingdom of Italy
In 1815 at the Battle of Waterloo Napoleon was defeated and exiled to St Helena.
Napoleon died in 1821.